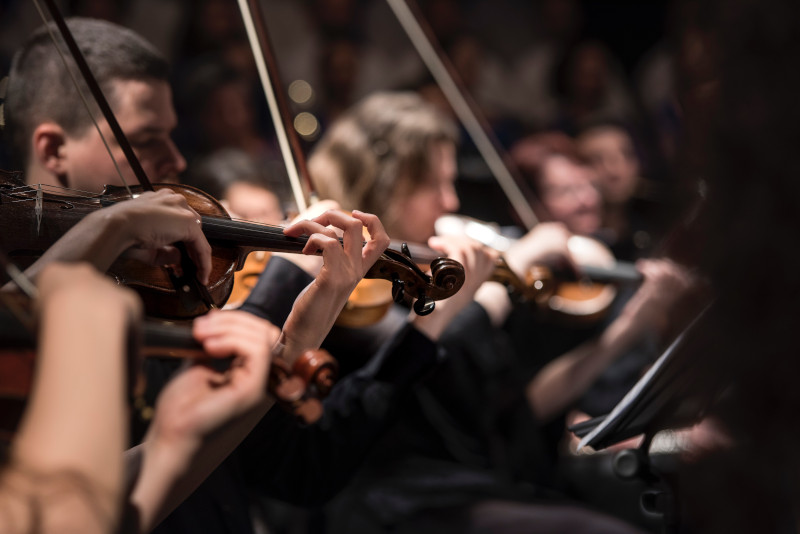 Living through the marvel of the Enescu Festival these past few days, I started to reflect on what positive leadership means: action, willingness to do good and humbleness among others.

- Berliner Philarmoniker, the “best symphony orchestra in the world” with Sir Simon Rattle, who, during his long tenure of 16 years, used to conduct teenager orchestras from Berlin’s schools of music.

- Concertgebouw Royal Orchestra, the other "best symphony orchestra in the world" has projects in which they have joint concerts with national youth orchestras from the countries they visit

- London Symphony Orchestra, “Britain’s best symphony orchestra in the world” adopted the definition of an orchestra as an “ensemble of possibilities” to identify and support young musicians to reach their potential.

I therefore had a deeper thought on where this type of humble and inclusive leadership is happening in Romania. Probably in many places where people make a difference, yet are still not very well known.

One of them is Asociatia pentru Valori in Educatie where some of the most determined and passionate school principals and teachers are selected in order to support their efforts to change the way education is done in Romania through the assistance of top international education development professionals and local business leaders.

September. Every other year, in Bucharest, we have the chance to live in the marvel of the George Enescu Festival. What a treat, what an experience! A rare and intense time for reflection, after months and years of stress, in which we dive deeper into our important jobs, focusing on being more effective at work, irrationally keen on our attempt to become better leaders to match the norms. And too often forgetting to use this leadership for ourselves (because being a leader is also about being yourself).

Each evening, waiting for the performance to start, I remembered the most classical example of leadership used in the trainings of the late 90s: 100+ players reaching harmony under the direction of a conductor. Many great composers used to conduct their own composition in the past. One of the greatest orchestra’s had only 5 chief conductors in 100 years.

When the music started, the magic begun, even for a novice like me. This magic lasted long after the concert, which made me curious to listening more to what the great orchestras have to tell.

Serving the audience and the music

Witnessing the first official performance of the new chief conductor of the “world’s greatest orchestra”, Berliner Philarmoniker, I had memory flashes with its previous, legendary Chief Conductor Sir Simon Rattle. During his 17-year tenure in Berlin, Sir Simon used to give his precious time to conduct workshops with the orchestras of 6 schools of music from the German Capital. Adapting his style to do good together with the young generation that many would call “impossible to manage”. What an experience, what a treat!

The London Symphony Orchestra, playing in Bucharest together with the young phenomenon Denis Matsuev. A strong statement from the “world’s greatest British orchestra”, that has embodied Pierre Boulez’s definition for an orchestra as being “an ensemble of possibilities”! The British orchestra has joined a program in which its top players share their experience with student-instrumentalists who have acquired the professional and entrepreneurial skills, helping them to reach their potential and become the next best 21st century musicians. As recognition and encouragement, the conductor’s emotion was released into embracing the soloist with an energy that reached until the farthest seat in Sala Palatului concert hall.

Concertgebouw, “the world’s other greatest orchestra” whose concertmaster is our Liviu Prunaru just ended a 3-year global project in which they played a piece together with local youth orchestras (Side by Side) in the countries they concerted. No surprise to see in Concertgebouw’s first row a few players whose age was less than 30 years old!

During the Enescu Festival, one of the oldest orchestras in the world, Statskapelle Dresden (established in 1548!) joined the contemporary glam of dazzling pianist Yuja Wang, revamping the standards of classical music’s seduction of today’s younger generations. And what an example of humbleness from the conductor to allow the “bis” only to her!

I knew that these orchestras are made of great musicians and personalities, and all of them are parking their ego at the door, playing as one under the magical wand of the Conductor. All being guided by the arching principle of “serving the audience and the music” and not the individual or even the orchestra!

With this edition of the Enescu Festival, concert after concert, I concluded that for top performance, regardless of the top players and the success of the past repertoire, leading alone from the forefront is no longer enough. Creating sustainable success today requires leading the process, not the event. And the process is allowing possibilities, as unusual as they may look. Possibility requires education, continuous learning and innovation, which is best acquired with the help of top professionals interested in doing good without a specific/ direct purpose. And it takes humbleness to do good.

This whole experience also made me reflect on how much we could learn about leadership from these “not so obvious for the masses” teams. That leadership is not about copying models that are often hard to reach but from becoming extremely good in what we do, with lots of effort and hard work. By compassionately sharing what we do best with others, with humbleness.

The top of mind Romanian example I found was AVE Romania, an NGO who is planning to change the education system in Romania and whose flagship project so far focuses on supporting school principals in their journey to create the best educational experiences for thousands of children.

Let’s stop for a moment for self-reflection. What does leadership mean to us? Doing our best? Being & doing good? Or just following certain company benchmarks?

You should also read

Starting with the publication of Daniel Goleman’s book on this subject in 1995, Emotional Intelligence has become one of the trendy concepts in the business world.  When the Harva..

S. Sherman considers that there are three main forces that forge an organisation’s behaviour: rules, mores, and personal integrity. He suggests thinking of this triad as three circles that..

The idea that you can have both character and success as a leader is still considered by many in the business world to be of secondary importance because character cannot, apparently, be quantif..

Read More
“Be Better Than Yesterday!”

Some 25 years ago, while in introspection regarding my life’s mission and purpose, and following my first years in P&G, I was hit by a thriving motto: “Be Better Than Yesterd..